skip to main | skip to sidebar

This race scared me. Well, I've done some difficult runs, but after failing time after time in local 166km run that should take around the same time, I had my doubts. This race is amazingly beautiful and consists of 101 mountainous km's on some smooth some very technical trails with ~6700m of vertical gain (and back of course). 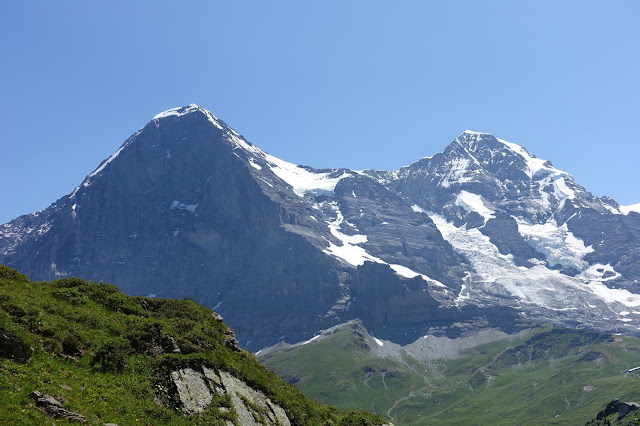 I trained for this race seriously including long runs on the local downhill bike trail on Manara Cliff, with up to 3000m elevation gain and loss followed by technical trails on Carmel "mountains" (small bumps compared to alps, but that's what I have). 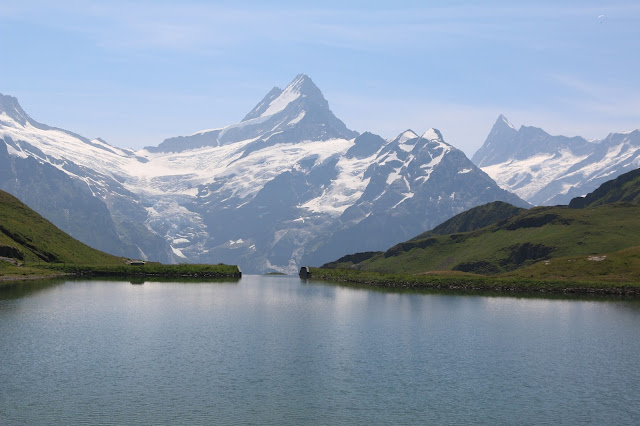 I arrived to the area 5 days ahead of the race with my family and we had time to travel a bit in the area, relax and "feel the ground". The weather was hot even in the mountains this days (up to 30 deg. Celsius) and the forecast for the race day was "sunny", but during instruction one of the points was how to behave during the lightening storm while exposed in the mountains.


The morning of the  race... ok it was 2 am wake up + 2:30 breakfast and then 4:30 start. I have misty memory of watching runners slowly gathering close to starting line, none really in a hurry, checking equipment last time with the tune of the official "are you ready to win the race" song. I was still scared but keen to go. We heard the count down, followed by the gun and then went ahead, some faster trying to reach the single trail with less crowds, others (like me) much, much slower.
What does the 5 min wait before the single matter if the run lasts more than 20 hours... not that much.

First part was steady climb with some rolling sections and not too technical, so I stayed comfortable and gone through the Grosse Sheidegg with 10 min to spare relative to my (very conservative) schedule. I tried to keep the same routine on the aid stations:
This was efficient and I felt well with the food (Sponser mostly). 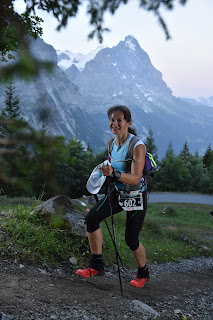 I passed First first time with sunrise colors still in the sky - in Europe it takes time for the sun to get up, especially with mountains around, and ran down an easy smooth pass to Bort station (17.4km). The climb back to First went through forest trail, steep but not dramatic, I took it easy, we had plenty of more climbing to do this day... and arrived to First station (22km) well before 9:00 (projected time). Here I met Vitaly and Michael for the first time in a set up that will be repeated 3 more times during the race: Vitaly waiting with camera at the station, Michael 200m before the station ready to catch me and walk with me to the station. 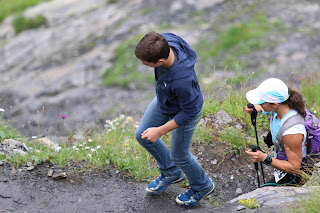 I got few pictures, the  food, a hug and was sent on my way till I meet them next time at half past 3 at Burglaunen station, 53 km. I still had a lot to climb before it though... The highest point was at Faulhorn that we saw from our hotel room looming at 2680m. On the way there it became colder and windy and the rain started, I got dressed up on my way, and did not stay long up there ...
The way down was the first and one of the most technical steep descents, enhanced by the rain.

Half way down to Shynige Platte at Egg station it warmed up again, so I put away the jackets, but this filled up the pack and I did not feel that I was almost out of the water already at the station. It's just about 6 km from Egg till Shynige Platte, but with the trail being that technical and mostly single trail (so every one had to wait in the line from time to time) it took not less than an hour, so I had time to get thirsty.
From there we had more rather steep descent to the midway station at Burglaunen were I saw Vitaly and Michael and we had two more meetings scheduled for the day: one in Wengen, another in Maennlichen, both  after rather brutal uphills with 1 VK of ascent each.
Arrival to Wengen carried plenty of positive energy just as it was each time for the Jungfrau marathon: people were cheering on the streets, with traditional "Bravo! Hop! Hop!", caw bells ringing and a lot of smiles on the way. I filled the water pack, this time on schedule, said "hi" to Vitaly and Michael and said that I plan to take it slow (not easy, even very slow was not easy on the climb to Maennlichen).
These 6 km took me more than an hour and a half... I had passed people taking every excuse to rest (like passing 100 more vertical meters, taking long time to take pictures, etc...) A couple of guys were right a step behind me, but when I offered to step aside so they could pass me, they insisted they felt much better where they were.

I took a bit more time for this station since I would not see my family till the finish, took warm clothes for the night and prepared the head lamp for the journey to Kleine Sheidegg, then started running easy downhill well before 20:00. It was still light, but there were more clouds and wind was getting stronger. It started raining and by 20:30; there were plenty of impressive lightnings followed explosive thunder with seconds between. I got to another turn to be met by race marshals who directed me to the short cut trail to Kleine Sheidegg, just ~500 m ahead and said that the race was interrupted, the storm was too dangerous and I would be safe at the station.

There was a long waiting till the storm passed and the runners were allowed to continue at 23:15. Due to the long wait the original route was changed and did not pass through Pfingstegg anymore. We went down almost to Grindelwald and then up to Alpiglen + Marmorbruch and then back to Grindelwald.
I had no idea where the updated went, and the timing made much less sense after a long break, so I took it even more slow than the rest of the race... Of course it might be also a touch connected to the couple of blisters that broken up and made sloshing sounds while I moved, or the fact that I managed to get a bit stiff during the break, but I believe that it's also the fact that I do not like to work too hard. 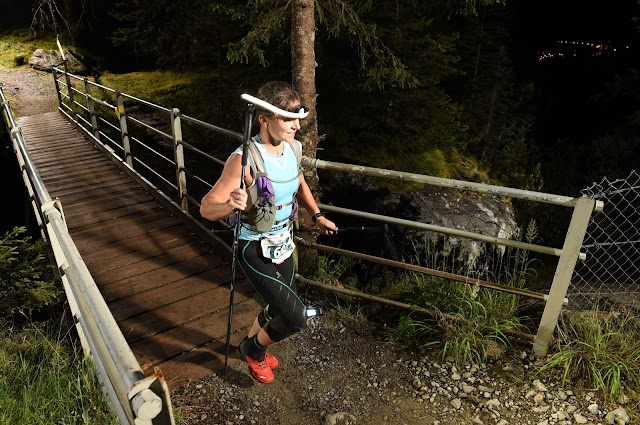 Eventually I got to the finish and even managed to send SMS to Vitaly 5 min before I passed (running!) this special bridge on the finish line. Unlike many other races I did not have to look where to hand in the chip or collect my finishing gear: I was met immediately after crossing the finish line by race official who took the chip off, handed the finisher sticker + t-shirt (in right size!!!) to me and a finishing Eiger stone!

It was amazing race, beautiful, hard, perfectly marked route (with reflective color on the ground + ribbons + signs), well stuffed stations with smiling and professional volunteers (500 of them!) who helped us all the way to have the best race possible.

My Projects and Related